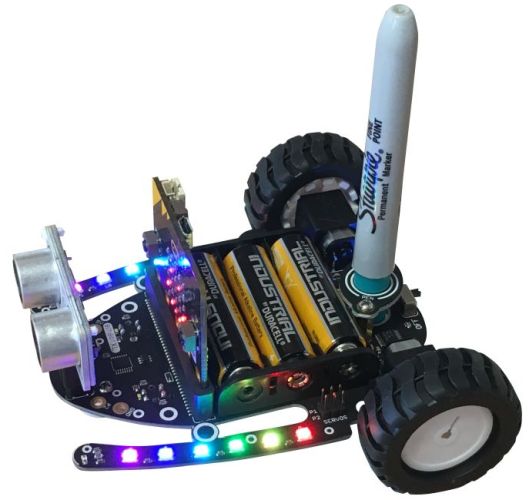 BitBot XL is the latest incarnation of the popular BitBot robot. It has the following features:

Python Programming can be found here

Load Makecode for the Microbit from makecode.microbit.org and create a New Project. Then select the Advanced tab and click on Extensions. You should see BitBot on the extensions home page. If not, enter bitbot in the search box and select the extension when it shows up. 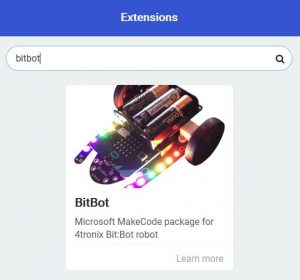 The BitBot Makecode extension is fully compatible with all models of BitBot, including BitBot XL. The extension will automatically select the correct  version to use when it runs (as long as the BitBot is switched on when the program starts) 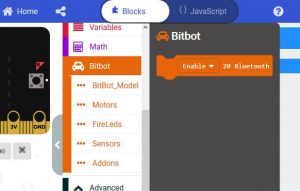 There are blocks available, in the “BitBot Model” category, to force a specific model (Classic or XL) as well as giving the ability to check which version the software is running on. This allows you to write programs that will run unchanged on all models of BitBot. 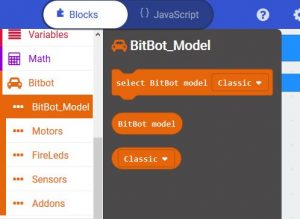 In the motors category, you can select blocks to go forward or reverse, or spin on the spot. Both types of block can optionally be run for a fixed time, then the robot will stop. 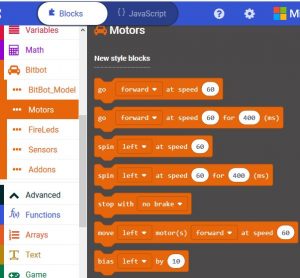 In addition you can stop BitBot with the stop block. This can be a fast stop with an electronic brake, or the robot can more slowly come to rest.

You can also drive each motor individually. This allows you, for example, to turn the left wheel slowly and the right wheel fast so that the BitBot curves smoothly to the left.

Small DC Motors as used in the BitBot and other small robots are never fully matched. To take account of this you can bias the motors to move in the opposite direction to their natural curve. For example, if the robot curves to the left when it should be travelling straight, add some right bias. Vice versa, if it curves to the right, then add some left bias.

There are 12 FireLeds on the BitBot. Each of which can be individually controlled with 16 million different colours (not that you can distinguish that many). 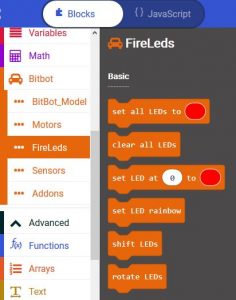 By default, the FireLeds are updated as soon as you make any change to them. If you are doing more complicated changes, you may want to change to manual updating so that you make all the changes required, then update the FireLeds once at the end. This is more efficient and gives a tidier appearance to animations, but isn’t necessary for the majority of uses.

You can set all of the FireLeds in one go to the same colour, using the “set all LEDs” block. If you click on the Red blob on the end of the block it will allow you to select one of 25 different colours (you can select your own colours as well, see the advanced blocks) 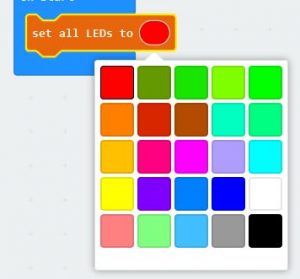 You can also set individual FireLeds (numbered 0 to 11 on the BitBot’s arms) to specific colours and clear all the FireLeds (switch them off). Setting the FireLeds to Rainbow, sets them all to different colours starting at Red and ending at Purple. 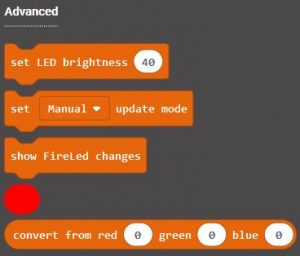 If you set the update mode to Manual (instead of Automatic) then you must run the “show FireLed changes” block after you make a change, otherwise nothing will change on the FireLeds themselves.

The final 2 blocks return a number representing a colour that you can select from the colour chooser or by setting specific Red, Green and Blue values. This colour number can be put into a variable for testing against other values, or you can use it directly to set the colour of FireLeds 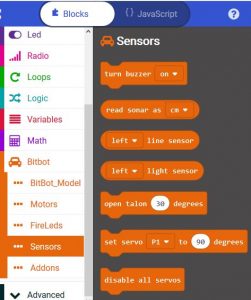 The Buzzer can be On (continuous beep) or Off (silent). On the BitBot XL, this can also be used to play music (badly) as it is connected to Pin 0. Use the standard Music blocks in Makecode to do this – it isn’t supported directly in the BitBot extension.

The optional ultrasonic sensor is used to measure the distance to the nearest sound reflecting object. This may be anything in the area as the focus of the sound beam is not very tight, so it may pick up other objects than the one you want. This block returns a number that can be the number of cm, number of inches, or a raw microseconds figure.

Similarly the light sensors return a number from 0 (totally dark) to 1023 (maximum brightness).

The line follower sensors are slightly different. They return a value of either 0 (no black line) or 1 (black line).

The Servos (BitBot XL only) and the Talon (optional on all models) operate in the same way – as the Talon is just a servo really.

For the Talon you can select the angle of the servo from 0 to 80 (closed to open). On the servos (BitBot XL only) you can select an angle from 0 (fully clockwise) to 180 (fully anti-clockwise)

If you want to release the pin from being a servo (as the servo pins on the BitBot XL are shared with the light sensors), then you can disable the servos.