SmartBadge is a wearable that you can program to display patterns or  messages, play games or just to blind anyone who comes too close

4 mini buttons give you control over menus, or game functions. You code, you decide!

Powered from a rechargeable lithium coin cell which lasts 45 minutes on a single charge whilst displaying patterns continuously. 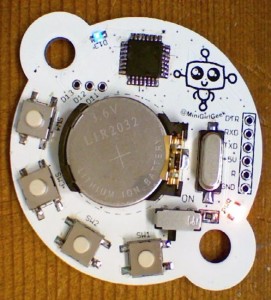 SW1 acts as the menu button. After a 5,4,3,2,1,0 countdown it shows a single purple LED. Pressing SW1 cycles through 1,2,3,4,5,6 LEDs lit. It times out after 5 seconds without a button press and runs the selected demo as below. You can press SW4 if you don’t want to wait the 5 seconds.

Press SW1 at any point to return to the menu